How I Turned Around My Health Crisis

How I Turned Around My Health Crisis

Published on April 16, 2021 | in My journey, Uncategorized By eatrightchef | 0 Comments

When I was 37, a health crisis hit me like a lightning bolt. I remember sitting in the gynecologist’s office. The look of concern on the doctor’s face unnerved me. She was going on and on about a gigantic fibroid sitting in my uterus. My mind drew a blank.

“What?” I thought. “How could that be? I had an annual checkup just a year ago and recieved a clean bill. What has happened to my body?”

I was in shock. My head dropped and I covered my face with my sweaty palms. Tears started dropping and I could not believe what I just heard. I said to myself: “I don’t need another bad news in my life right now!”

My father was dying from cancer on the other side of the world. I was devastated when this bad news dropped.

“Oh no! I don’t want to go to the hospital!” I was scared. I witnessed how my father was butchered in the hospital during his long treatment period. I never imagined that I might end up with the same fate.

So I started reading books upon books on how to heal our body with natural methods. With each book that I read, I tried out the suggestions. Juicing, fasting, detoxing, and eventually, I went all out with a raw vegan diet.

After being on this diet for over half a year, I hit a brick! I woke up feeling like the sky was spinning and my world was literally upside down. “Isn’t this diet supposed to make me feel great?” The dizziness didn’t go away until two full hours later.

At that point, I knew in my gut that something was very wrong with my body. I mean, how come it felt like climbing a mountain when I was walking up a flight of stairs? How come my hair was falling out en masse and my skin was dry like a desert? And worst of all, I developed the worst acid reflux I had ever had, so much so that eating and sleeping became a problem. “No way,” I told myself. “Time to call it quits!”

One day, when reading a book about 100 superfoods for longevity, I came upon the concept of eating according to your blood type. I became intrigued. At the same time, I was tired of trying 100 different types of foods to make myself feel better. I mean, come on! How on earth can you manage to stuff down so many foods, each claimed to be a superfood? This was too overwhelming and confusing.

So, I picked up the recommended book that talked about how to eat right for your blood type. Then, everything just started to make sense!

Once I learned how to eat the right foods for my unique body type, and avoided those foods that made me sick, my health turned around 180 degrees. Since then, for over 10 years, I have kept myself in good shape. I gained so much energy and felt better than ever.

Surprisingly, my painful menstrual cramps, along with all those PMS symptoms like headaches, acne, swollen and painful breasts all went away silently. In fact, all the cysts in my breasts that I had since my puberty also disappeared. I was shocked. For the first time in my life, I didn’t dread being a woman with all those irritating and sometimes miserable monthly inconveniences. I was able to go to dance classes without any issues.

Fast forward 12 years, I am in menopause, but I hardly have any symptoms and complaints like hot flashes, night sweats or mood swings. This is thanks to radical diet and lifestyle changes I made a decade ago. And the bonus of that is, I have been able to maintain a healthy weight and shape without depriving myself of delicious food.

Because of how amazing I feel, I decided to share what I learned with women who are going through perimenopause. I hope that these women can feel great once again like I do, and look forward to sailing through their menopause and enjoying the second half of their precious lives. This is why I’m doing what I’m doing, and I love every minute of it.

What about those fibroids? Well, it’s a long story. But the gist of it is, they had already grown too big before I started to turn my health around using natural ways. So eventually I had them removed surgically. But luckily I did not let fear overcome me and rush into the operating room for a hysterectomy, which 9 out of the 10 doctors I saw suggested. I waited five years until I found a surgeon who was willing to preserve my uterus, and the operation was a success. The strange thing was, during those five years, my fibroids didn’t grow at the rate the doctors had expected, and I had absolutely no excess bleeding issues or pain. After the surgery, my recovery was phenomenal thanks to years of eating anti-inflammatory and healing foods. Since then, I have shifted my focus from managing disease to maintaing health. It has been an awesome journey!

Subscribe to learn more about personalized nutrition and receive recipes, cooking tips and occasional emails from the "Eat Right Chef"!

Success! Thank you for subscribing to my newsletter! You should be receiving my welcome email shortly. If you don’t see an email from me after a while, please check your spam folder and add [email protected] to your email contacts. I am so excited to get to know you and be a part of your personal health journey. If you ever have any questions, simply reply to your newsletter or use the contact form on this site to get in touch.

Health Strategies to Guide You Through the Coronavirus Pandemic

This site uses Akismet to reduce spam. Learn how your comment data is processed. 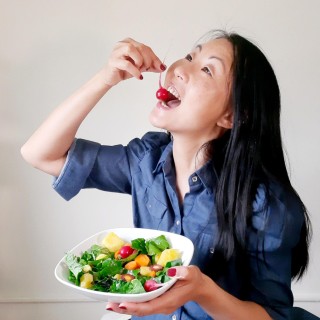 I help women 45+ create a strategy to lose weight and increase their energy so they can enjoy being active and healthy in the second half of their life.

Subscribe to learn more about personalized nutrition and receive recipes, cooking tips and occasional emails from the "Eat Right Chef"!

Success! Thank you for subscribing to my newsletter! You should be receiving my welcome email shortly. If you don’t see an email from me after a while, please check your spam folder and add [email protected] to your email contacts. I am so excited to get to know you and be a part of your personal health journey. If you ever have any questions, simply reply to your newsletter or use the contact form on this site to get in touch.

Broccoli Bliss: I planted some broccoli seeds in early April, hoping to harvest some nice broccoli heads 🥦 in the Summer. Alas, the broccoli's didn't "head" (no florets developed), probably due to the timing not being right or the temperature fluctuations... who knows? I'm a novice in gardening so mishaps like this are expected. But what really surprised me was how big the broccoli leaves have grown! I have never seen such gigantic broccoli leaves. And to my surprise, they taste mildly sweet and delicious--raw or cooked. I have tried it in salads, steamed, stir-fried and it tastes wonderful in every way.
"I am so relieved that Louisa tried to meet me where I am. I feel that I've finally understood the importance of putting my health first and that I feel motivated to take the first step to actively care for myself. I was a little hesitant to give this a try, but I’m so glad I did. If you’re thinking about losing weight and feeling better, just give it a try!"
Exciting News: I have migrated my online cooking course, "Cooking with Love," to a new platform. It works much better and each lesson contains a comment section for learners to post their questions, and an Assignment section to post their photos and share their experience in cooking. This is the most comprehensive and all-inclusive learning environment for anyone wanting to get the low-down on how to choose Blood Type-specific ingredients, do meal prep and create your very own recipes on the fly without relying on recipes all the time.
This is an excellent exercise to build core strength, especially the lower abdominal muscles. I enjoyed doing this exercise at @the_accidental_artist 's Progressing Ballet Technique class. I'm missing the weekly classes and grateful for them in the past few months. My muscles got entrained with the correct memories for ballet movements and that's invaluable. In addition, I think the training saved me recently from getting a worse outcome from a home accident where a few vertebrae in my lower back got slightly displaced. At first I was unable to walk or sit properly. Fortunately I found a traditional Chinese medicine doctor who did a few maneuvers and got me back on my feet within a week. Whew! When treating me, he said I have very strong muscles and good muscle tone, a body that's 10 years younger than my biological age. I reflected on how important it is to train our bodies as we get older. Accidents happen. But a well-trained body helps shorten the recovery time. I'm looking forward to doing PBT again with my teacher Sarah Arnold in the fall. Will you join us? 😃🤗
When you think of a big problem you're facing, does your brain immediately present you with thousands of different options and hundreds of steps to get to the solution?
A little video summary of my organic gardening adventures... so far. 🌱🌱🌱🍅🥦🥬🥒🌶🥕
"I knew I had to do something about my belly fat but I just didn't know where to start. Now I have a plan and am feeling hopeful! Finally I have the help of someone who knows how to solve my problems in a smart way. " ~Heiddi Z.
In my recent sessions to help clients make a strategy to zap their belly fat, I have realized that one common misunderstanding that midlife women share, is that they need to ramp up their exercise level in order to lose that fat. This is especially true for Type O women like me, because we were told that Type O individuals need rigorous cardio exercises, 3-4 times a week, each lasting about 40 minutes. To be honest, I don't do that myself! How can a working woman with lots of responsibilities fit that into her schedule? Or, if we are already low on energy, how do we muster up the motivation to get on the treadmill or run a few miles? Or, what if we are putting undue stress on joints that already hurt?
There is a Korean phrase: "sinto buri" ‘신토불이’, which translates into "body and soil cannot be separated." It means that our bodies and spirits are at their best when eating foods that grow on the soil we step on. In Korea, it is used to emphasize the importance of local food and where food comes from. Isn't that cool? I am so happy and proud that I can practice this concept with the help of Newburgh Armory Community Garden. Finally, my dream of eating food that I grow myself has become a reality!
Privacy & Cookies: This site uses cookies. By continuing to use this website, you agree to their use.
To find out more, including how to control cookies, see here: Cookie Policy
Take a Survey
×
Loading Comments...